INCISE is happy to announce a forum and workshop on the 27th of January 2018 (10am-5pm) in collaboration with Fo Guang Shan London:

The day’s programme will include academic talks (morning), a light lunch, and a workshop (afternoon).

The Venerables were received by SMT member Marco Keir (CCCU’s Director of Marketing and Communications) and Professor Bee Scherer (Director of INCISE).

The parties signed a funding agreement for the collaborative Forum and discussed details of the event. 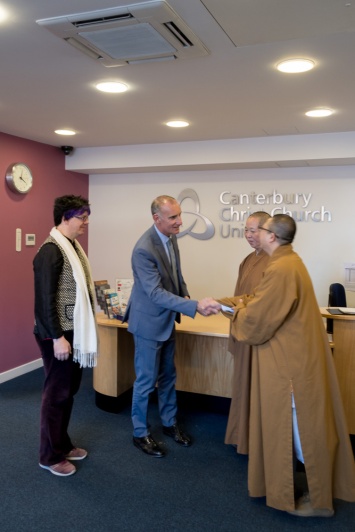 The INCISE research centre (Intersectional Centre for Inclusion and Social Justice) held its first seminar in 2017-2018 ‘Buddhism and Social Justice’ Series with a lecture by Emma Slade (Ani Pema Deki), followed by the signing of her book, Set Free.

Emma Slade is an inspirational speaker. Her life has demonstrated the potential for human growth and change. Overcoming the trauma of being held hostage in 1997 in Jakarta she went on to leave her high-flying finance career and embark on a journey to greater understanding.

She has written in clear and honest terms about this journey in her book, Set Free, which describes this and her decision to become ordained as a Buddhist nun in Bhutan. She is ever hopeful that mental wellbeing is increasingly taking centre stage as an inspiring and important subject and believes the tools of mindfulness, compassion and renunciation can play an important role in mental wellbeing and freedom. She attended Cambridge University, Goldsmiths University, became a Chartered Financial Analyst and is the first Western woman ordained in the Himalayan Kingdom of Bhutan. In 2015 she founded the UK charity Opening Your Heart to Bhutan to help children in the country she loves so much. Royalties from her book, Set Free, go to this charity.

The book is available on Amazon.co.uk and Amazon.com and many other retailers and from the Canterbury Christ Church University Bookshop. 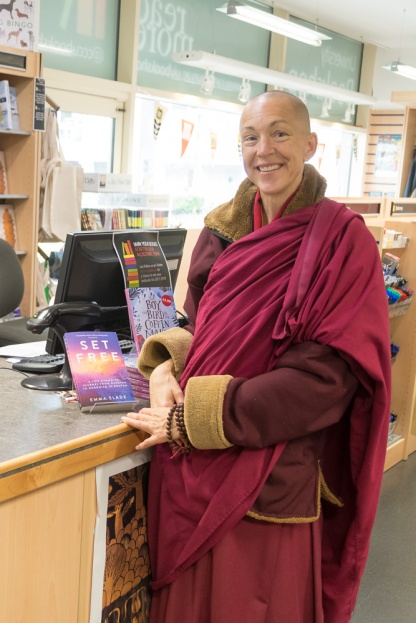 Emma Slade and her book Set Free at the CCCU Bookshop

My Tweets
Follow Intersectional Centre for Inclusion and Social Justice on WordPress.com